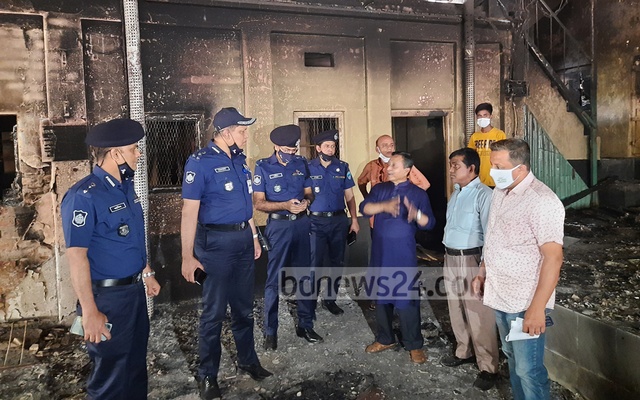 Md Anwar Hossain, deputy inspector general of police for Chattogram Range, said on Monday the experts from the two agencies will collect evidence from the scenes.

He visited the sites, including Alauddin Sangitangan music school and Brahmanbaria Press Club in the town.

At least 20 places were damaged in the attacks and the process to file cases over the incident was ongoing, said the DIG.

“Police were not bystanders during the vandalism and arson attacks. We tried our best. We tried to tackle the situation by deploying additional forces from outside.

“We’ve however formed a three-member committee [to investigate alleged neglect of duty],” he added.

Hefazat-e-Islam called for a nationwide general strike on Sunday after clashes and deaths in Dhaka, Chattogram and Brahmanbaria on Friday and Saturday over Indian Prime Minister Narendra Modi’s visit.

Madrasa students and Hifazat supporters damaged public and private establishments and clashed with the police and Border Guard Bangladesh on Saturday and Sunday. At least seven people died in the clashes.

Hifazat and many other groups objected to inviting Modi to the celebrations of Bangabandhu’s birth centenary for his government’s policy towards minority Muslims.

Read More:  Pfizer is not superior to Moderna and it's 'perfectly okay' to mix COVID vaccines, experts say