COVID-19 vaccine rollout prevented up to 279,000 US deaths and 1.25 million hospitalizations, study finds

The COVID-19 vaccine rollout prevented hundreds of thousands of deaths from the disease in the U.S., a new study suggests.

Researchers from the Yale School of Public Health (YSPH) ran simulations to determine what would have happened if no vaccines had been distributed through summer 2021.

Results showed there would have been up to 279,000 more COVID-19-related deaths and 1.25 million hospitalizations from the virus.

Since the beginning of the pandemic, more than 606,000 American deaths have been recorded, but daily fatalities have fallen from an average of 4,000 deaths in early February 2021 during the winter surge to 230 this month, in large part thanks to the vaccine.

But the team says this progress could be reversed as the vaccination campaign stalls in the U.S. and the Indian ‘Delta’ variant continues to sweep across the country, causing surges in pockets of the U.S. with both high and low vaccination rates. 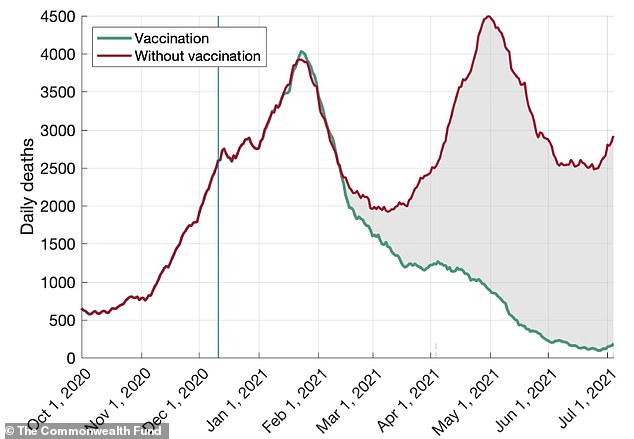 A new study found that with no COVID-19 vaccine rollout in the U.S., there would have been up to 279,000 additional deaths by this summer 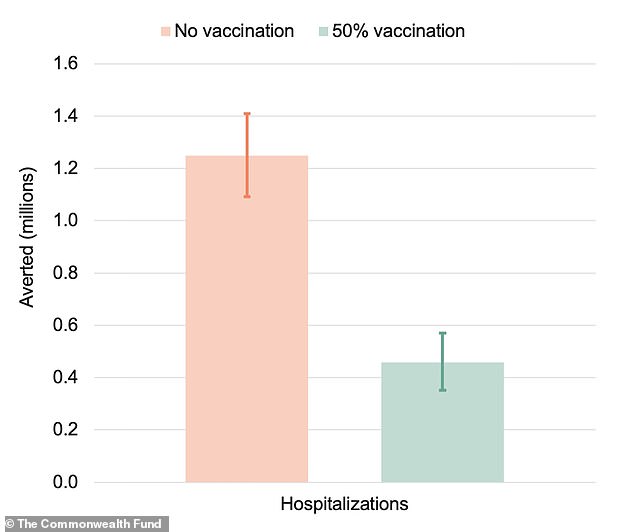 ‘The vaccines have been strikingly successful in reducing the spread of the virus and saving hundreds of thousands of lives in the United States alone,’ said lead author Dr Alison Galvani, director of the Center for Infectious Disease Modeling and Analysis at YSPH, in a news release.

‘Yet until a greater majority of Americans are vaccinated, many more people could still die from this virus. The danger is not over. Now is not the time to let down our guard.’

For the study, published by the private foundation The Commonwealth Fund, the team looked at the trajectory of the pandemic from October 1, 2020, through July 1, 2021.

They also looked at data surrounding vaccinations and adjusted for the emergence of highly transmissible variants including the Kent “Alpha’ variant, the Brazilian ‘Gamma’ variant and the Delta variant.

The Delta variant has since become the dominant strain the U.S., making up 51.7 percent of all new infections.

However, all three vaccines approved for emergency use authorization in the U.S. have been shown to be affective against variants, including the Delta variant.

The model accounted for two hypothetical scenarios: one in which no COVID-19 vaccines were administered and one in which half as many daily vaccines had been given by summer 2021.

As of Friday, 332 million doses have been distributed in the U.S. with 55 percent of the population receiving at least one dose – including 67.4 percent of adults.

If only half as many doses had been administered, or about 166 million doses, by July 1, there would have been about 121,000 additional deaths and more than 457,000 additional hospitalizations.

Additionally, the daily rate of deaths would have exceeded the observed rate of deaths, reaching a little bit higher than 4,000 per day. 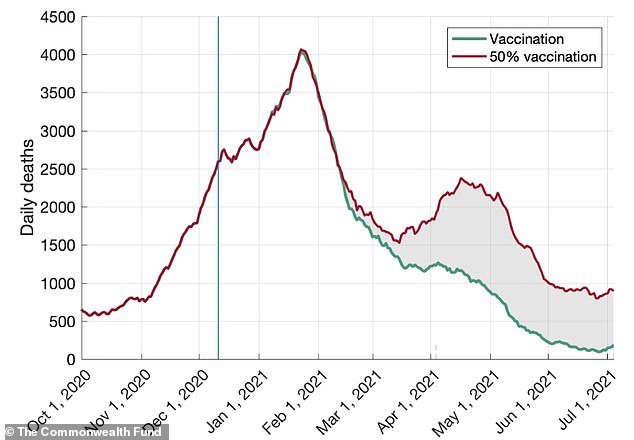 Read More:  'Would you get Covid-19 squirted up your nose to help create new vaccines?'

f only half as many COVID-19 vaccine doses had been administered, there would have been about 121,000 additional deaths by the end of June 2021 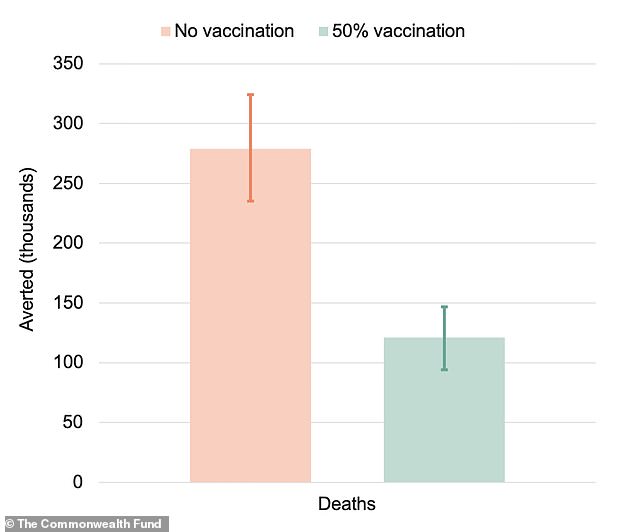 The model found that no COVID-19 vaccine would have likely caused a spring surge with 4,500 deaths per day, higher than seen during the winter surge

Next, the researchers looked at the number of death and hospitalizations that would have occurred in the U.S. without a vaccination program.

The model determined that, with no vaccine, there would have been up to 279,000 additional deaths by the end of June this year.

Researchers also found there would have been a spring surge this year with a potential of hitting 4,500 deaths per day, more than the 4,000 deaths per day recorded in February.

‘Our results demonstrate the extraordinary impact of rapidly vaccinating a large share of the population to prevent hospitalizations and deaths,’ the authors wrote.

‘The speed of vaccination seems to have prevented another potential wave of the U.S. pandemic in April that might otherwise have been triggered by the Alpha and Gamma variants.

‘Additional new variants such as Delta will pose a special threat to unvaccinated populations in coming months.

‘A renewed commitment to expanding vaccine access will be crucial to achieving higher levels of vaccination necessary to control of the pandemic and prevent avoidable suffering, particularly for those in historically underserved groups and areas of the U.S. with low vaccination rates.’ 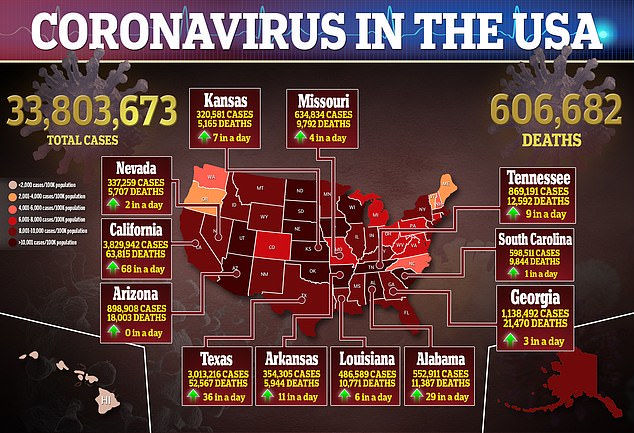