Six of the dead tested positive for coronavirus, while the rest were all showing symptoms consistent with the disease. Five of those who tested positive hailed from Chapainawabganj, while one was from Naogaon.

Twelve of the dead were men, while one was a woman, said RMCH Director Brigadier General Shameem Yazdani. Two of them hailed from Rajshahi, six from Chapainawabganj, three from Naogaon and one each from Natore and Kushtia.

This raises the number of people who have died at the coronavirus unit in the past 13 days (from 6 am on Jun 1 to 6 am on Jun 13) to 125, he said. Seventy of them had tested positive for coronavirus, while the rest were displaying symptoms.

Another 42 patients were admitted to the unit in the past 24 hours, Yazdani said, while 35 recovered from the disease and were released. This raises the number of patients receiving care at the unit to 294, well above the unit’s capacity of 271 beds, but hospital staff are trying to manage by increasing the number of beds through alternate means.

Eighteen patients are admitted to the hospital’s ICU.

After three straight days of falling positivity rates from coronavirus tests at the RMCH labs, the figure has jumped up by nearly 16 percent. 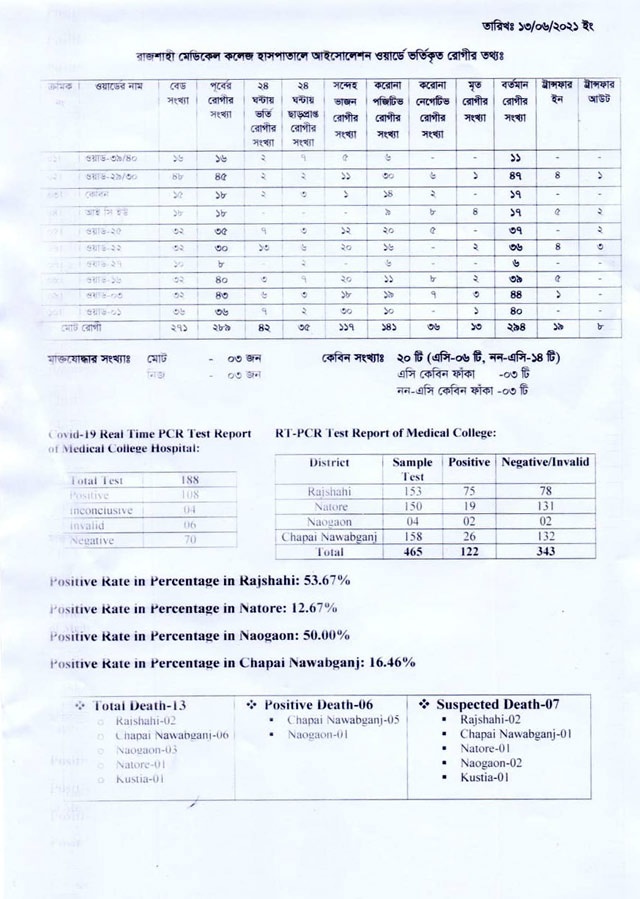 Rajshahi is currently in its third day of a week-long ‘strictest lockdown’.

The lockdown started late on Friday afternoon and will continue until Jun 17.

The streets were largely empty in Rajshahi city on Saturday. Stores and shops were closed. But a number of pedestrians could still be seen in the area.

“Police have set up checkposts at all roads leading to the city to ensure that no one enters the city limits,” he said. “Patrols are also scouring the area and we are doing our utmost to implement the lockdown.”