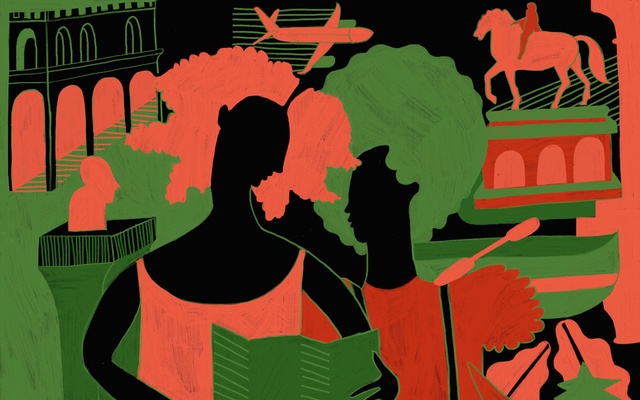 In the wake of George Floyd’s killing, everybody from hotel operators to luggage-makers declared themselves allies of the protesters. At a time when few people were travelling, Instagram posts and pledges to diversify were easy to make. But now, as travel once again picks up, the question of how much travel has really changed has taken on new urgency.

“From the very emergence of the COVID pandemic and especially in the wake of uprisings last summer, there’s a question about place,” said Paul Farber, director of Monument Lab, a Pennsylvania-based public art and history studio that works with cities and states that want to examine, remove or add historic monuments. “What is the relationship of people and places? Where are sites of belonging? Where are sites where historic injustices may be physically or socially marked?”

Monument Lab is one of several organizations, groups and individuals trying to change the way travellers of all colours understand America’s racially fraught history. Urging people to engage with history beyond museums and presentations from preservation societies is one approach.

In turn, many travellers are paying close attention to whether companies are following through with their promises from last year. Black travellers, in particular, are doubling down on supporting Black-owned businesses. A survey released this year by consulting firm MMGY Global found that Black travellers, particularly those in the United States, Canada, Britain and Ireland, are keenly interested in how destinations and travel service providers approach diversity, and that it influences their travel decision-making.

At Monument Lab, questions about belonging, inclusion and how history memorialises different people were coming up frequently over the past year, Farber said, particularly from travellers looking to learn about Confederate and other monuments while road-tripping.

In response, Monument Lab, which examines the meaning of monuments, created an activity guide called Field Trip, which allows people to pause on their trips to learn about specific monuments. On a worksheet, participants are prompted to question who created the monuments, why they were made and what they represent.

In creating Field Trip, it became clear to Farber that travellers have a strong interest in learning about Black history. This sentiment is echoed by tour operators who offer civil rights and other social justice-oriented tours like those focusing on the contributions of Black Americans, women and figures in the LGBTQ community.

“There are a lot of white people who for the first time have had a conversation about racial justice and maybe even heard the words ‘systemic racism’ for the first time,” said Rebecca Fisher, founder of Beyond the Bell Tours, a Philadelphia-based operator of social justice-oriented tours that highlight marginalised communities. “People heard the new words and now they want to learn. That doesn’t mean that it is backed up with results, but I am seeing a trend in interest.”

On a tour with Beyond the Bell, participants might hear about Philadelphia’s President’s House but also about Ona Judge, an enslaved woman who escaped from George Washington’s home, and about the former president’s efforts to recapture her. One of the company’s most popular tours focuses on gay history in the city.

Black travellers, in particular, are increasingly looking for ways to show their support for Black-owned travel businesses.

Even as the family road trip has made a comeback in the wake of the coronavirus, that sort of trip hasn’t been a source of unfettered freedom for generations of Black motorists because of Jim Crow laws enforcing racial segregation in the United States. And now, after a year in which protests of the police killings of Black people amplified the perils of skin colour, Black travellers are seeking out Black travel agents, hoteliers and short-term rental owners in addition to organising groups dedicated to Black travellers.

In fact, according to the international survey of nearly 4,000 Black leisure travellers by MMGY Global, 54 percent of US respondents said they were more likely to visit a destination if they saw Black representation in travel advertising. In Britain and Ireland, 42 percent echoed that sentiment, and in Canada that number was 40 percent.

“Another highly influential factor in the decision-making process is whether the destination is perceived as safe for Black travellers,” the survey noted. “Seventy-one percent of US and Canadian respondents felt safety was extremely or very influential to their decision.”

In Facebook groups, Clubhouse chat rooms and across other social media platforms, Black travellers regularly ask one another for recommendations about where to travel, particularly about where others have been where they felt safe and welcome. While these questions are often about foreign destinations, in a year when Americans could largely only travel within the United States, inquiries increasingly arose about where travellers felt safe within the country.

“I was just curious on some good and safe locations for a first time solo traveller here in the States,” one woman posted in a group specifically for Black female travellers in June.

“Where’s a good ‘safe’ place to travel in the States?” asked another woman who was planning a 35th birthday trip with her sister.

This type of community gathering, though now online, isn’t new. For decades, African American travellers have looked to one another for guidance on where to travel. The most referenced form was Victor Hugo Green’s Green Book, a guide for Black travellers that was published annually from 1936 to 1966.

Last summer, facing an onslaught of messaging from travel companies saying that they supported the Black Lives Matter movement and would be committing to diversifying their ranks and finding other ways to be more inclusive, Kristin Braswell, owner of CrushGlobal, a company that works with locals around the world to plan trips, decided to make the inclusion of Black businesses central to her work.

As a Black woman with a passion for travel, she started making travel guides that focused on supporting Black businesses. Each guide, whether it be to national parks, beach towns or wine country, provides information on businesses owned by Black people as well as guidance about diversity in the area and more.

“These road trips and initiatives that speak to people of colour in general are important because we’ve been left out of travel narratives,” Braswell said. “If you’re going to be creating experiences where people are going out into the world, all people should be included in those experiences.”

Braswell added that the bulk of her business comes from Black travellers. These travellers, she said, are looking for Black travel advisers who have the knowledge of places where they are welcomed and can help them plan their trips.

Over the past year travellers of all racial backgrounds have been increasingly asking for tours and experiences that include Black-owned businesses, she said.

Across the country, as people protested police brutality, travellers demanded to see more travellers who looked like them in advertising; they spoke out against tourism boards that hadn’t been inclusive in the past, and formed organisations like the Black Travel Alliance, calling for more Black travel influencers, writers and photographers to be employed.

The alliance and others have been pushing for more Black travellers to be visible and included in the industry and in spaces of leisure travel.

At the same time, tour providers like Free Egunfemi Bangura, founder of Untold RVA, based in Richmond, Virginia, are offering tours that centre on the contributions of Black people. In a city like Richmond, once a capital of the Confederacy, she said that means seeing the value of working outside the established system of preservation societies and museums that are typically run by white leadership.

To Bangura and other activists, artists and tour operators, museums and traditional preservation societies are part of the culture of exclusion that has historically left Black people out and continues to present versions of history that focus on white narratives. Bangura’s tours take place on the streets of the city as a better way to understand the local history.

At a time when state legislatures are pushing for and passing laws that limit what and how much students learn about the contributions of Black and other marginalised people to the country, Bangura and others said, tours that show their contributions are even more important.

“There is a way to take these experiences out of the hands of the traditional preservation community so you don’t have to go into the walls of a museum,” Bangura said, adding that another reason institutions like museums aren’t optimal is because some people aren’t keen to visit them. “But think of how often it is that after you come outside of a Black-owned coffee shop, you’re actually able to hear about some of the Black people in that neighbourhood or people that fought for Black freedom.”

Additionally, although the tourism industry took a hit last year, outdoor activities continued to draw visitors, making outdoor tours like Bangura’s and Fisher’s of Beyond the Bell popular. Bangura said the style of her offerings makes them accessible for all travellers, especially those without smartphones for scanning QR codes or those unable to take part in headphone-aided tours.

Among the several kinds of tours and experiences Bangura has created is Black Monument Avenue, a three-block interactive experience in Richmond’s majority-Black Highland Park neighbourhood. Visitors can drive through and call a designated phone line with unique access codes to hear songs, poems and messages about each installation. Every August, she runs Gabriel Week, honouring Gabriel Prosser, a slave who led a rebellion in the Richmond area in 1800.

Walking tours also provide a visceral sense of history that differs from the experience of a museum. Even as the National Museum of African American History and Culture has attracted record numbers of visitors to Washington, DC, tours like Bangura’s can provide a more local perspective and show visitors exactly where something significant happened.

“It’s important to see where things were, how things were working in relation to one another,” she added. “You can see the proximity of folks’ houses and schools and churches. You can imagine how folks would have walked around and navigated and visited each other in a way that you might not in a museum.”