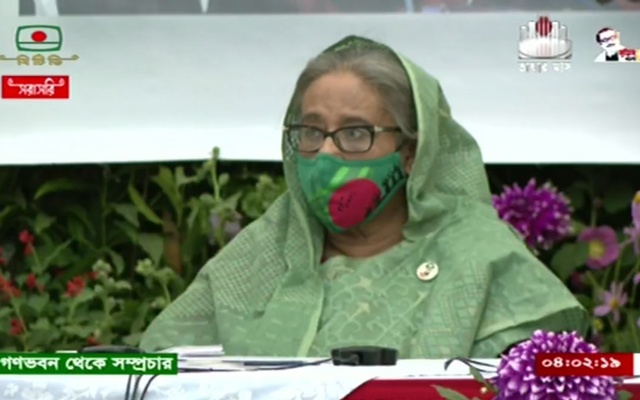 Hasina was speaking at a media briefing on Saturday after receiving the final recommendation from the UN Committee for Development Policy on its graduation from the LDC category.

“Yesterday, Bangladesh received the final recommendation from the United Nations to move from a least developed country to a developing country. We are fully qualified to be promoted to the rank of developing countries,” she said.

“This is a matter of great joy and pride for the entire nation. It comes at a time when we are celebrating the birth centenary of Bangabandhu Sheikh Mujibur Rahman, the greatest Bengali of all time, and are on the verge of celebrating the golden jubilee of independence.”

The prime minister dedicated the achievement to the next generation of Bangladeshis who will “take the country further and transform it into a developed and prosperous nation”.

With the final recommendation from the UN panel, Bangladesh received a five-year transition period. That means Bangladesh will formally graduate to the developing nation category in 2026.

Bangladesh has been on the UN’s LDC list since 1975. According to the UN, a country is eligible to graduate from the LDC category if it has a gross national income (GNI) per capita of $ 1,230 or above for three years, a Human Assets Index (HAI) of 66 or above and an Economic Vulnerability Index (EVI) of 32 or below. Graduation requires fulfilling these criteria in two consecutive tri-annual reviews.

Bangladesh satisfied all the necessary conditions for the first time in 2018 and has continued to meet the mark ever since. The South Asian nation is now set to rank among developing countries along with Nepal and Lao DPR.

According to the CDP provisions, a country can get between three and five years to make preparations after the recommendation is made.

To make the step up to the ‘developing nation’ bracket sustainable amid the coronavirus pandemic, Bangladesh has sought the facilities reserved for LDCs during its five-year preparatory period.

After the formal graduation, Bangladesh will lose the benefits for LDCs, such as soft loans and export facilities. It can, however, enjoy those benefits during the five-year preparatory period.

Under the current rules, Bangladesh will enjoy duty-free access to the European Union for three more years after 2026.