People living in the U.S. have weathered over fifteen months of life-shifts for work, school, prayer, fitness, and social lives. So you might think that the most important public priority for Congress might have something to do with COVID-19, vaccines, or health insurance coverage. 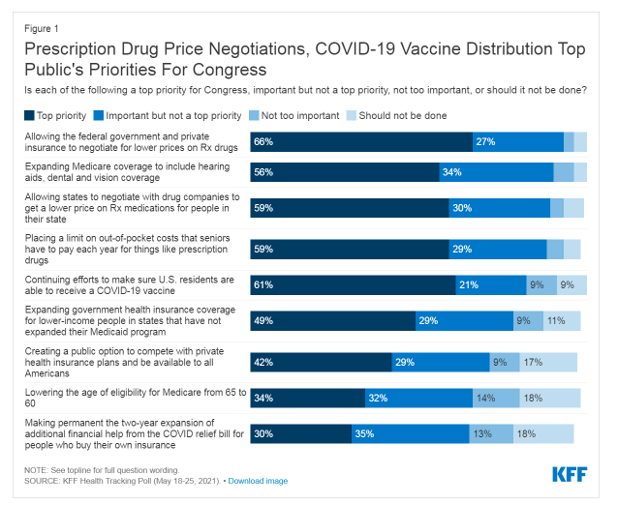 But across all priorities, it turns out that prescription drug costs rank higher in Americans’ minds than any other issue in the Kaiser Family Foundation Health Tracking Poll for June 2021.

Two-thirds of U.S. adults said that allowing the federal government and private insurance plans to negotiate for lower prices on Rx drugs was their top priority.

In second place, we find the pandemic priority cited: sixty-one percent of American adults said that continuing efforts to make sure U.S. residents were able to receive a COVID-19 vaccine was a “top priority.”

In third and fourth-place, 59% of consumers point again to drug prices as a top priority:

On the cost-front, 90% of U.S. adults note that expanding Medicare to including hearing aids, dental and vision coverage would be their top or an important priority, shown in the second line in the bar chart on public priorities.

Regarding peoples’ veracity and passion about the price of prescription drugs in America, KFF asked people about their views on regulation of the safety of drugs as well as their pricing policies crafted by drug companies.

Only 21% of people said there is just about the right amount of regulation for limiting the price of Rx’s in the U.S. 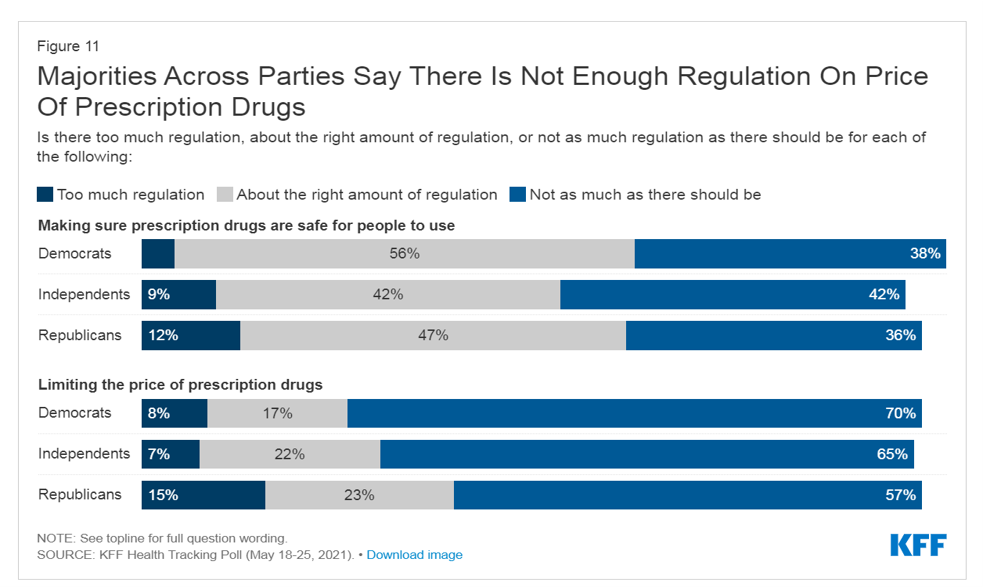 Now, to the partisan aspects of the issue of drug pricing — and this is where the title of this post comes from.

As KFF titles the data slide, “Majorities Across Parties Say ‘There is Not Enough Regulation on Price Of Prescription Drugs,” shown here in Figure 11 from the Poll.

Note the lighter blue bars to the right on the graph; these assert that “there is not as much regulation as there should be.”

Across parties, we see that: 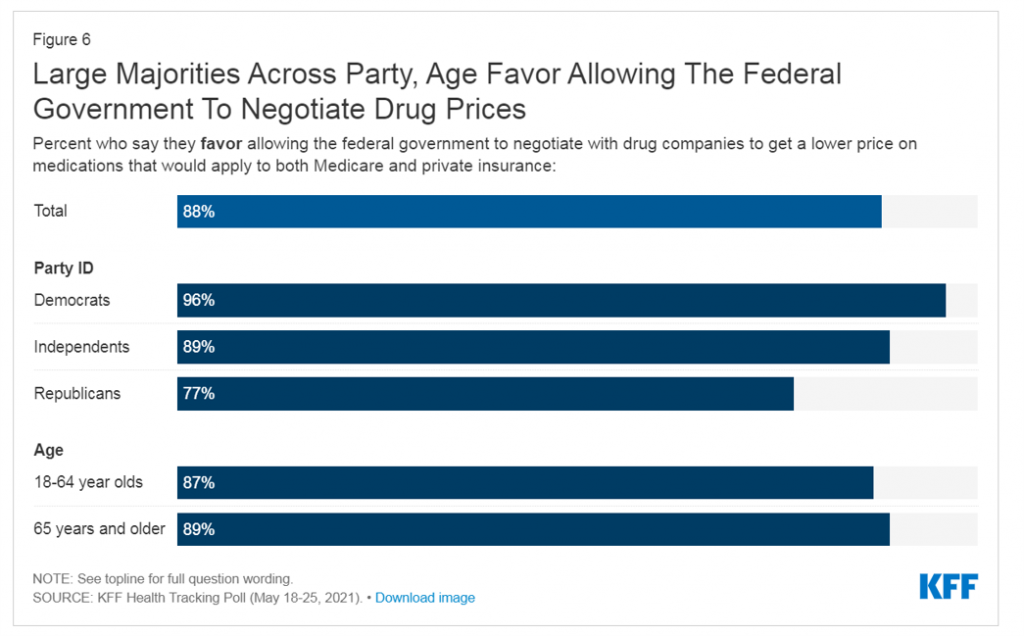 Health Populi’s Hot Points:  The last chart from the study (Figure 8) underscores the universality of the finding that lowering the price of prescription drugs is one of the very few issues in the U.S. that bring voters together.

Can you name another issue that crosses the political chasm in America as this one does?

Looking at the age breakout between people below Medicare-age and those 65 years and over, there is also concurrence across generations matching the overall percent of nearly 9 in 10 people favorite allowing the federal government to negotiate with drug companies to get lower prices on meds to apply to both Medicare and private insurance.

The question remains: will legislators in Congress and State Houses comport with voters’ priorities for the issue of drug price negotiation?

President Trump had “promised” to address this in his TIME Man of the Year interview leading up to his move to the White House. Through his four years in the Oval Office, President Trump did not fulfill that mission.

Yesterday, Liz Fowler, Director of the Center for Medicare and Medicaid Innovation (CMMI), was quoted in The Hill about Congress’s continuing work on “sweeping” drug price legislation. She said, “Let’s see what Congress can do, because it’s a lot easier to make progress on this issue there,” she said. “But if that’s not possible, I think we stand ready to work with them and look and see how far we can get.”